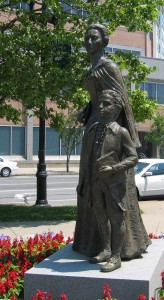 In January of 1780, Abigail Adams, wife of President John Adams wrote to her son John Quincy Adams, who would later become the sixth  US president, “These are the times in which a genius would wish to live. It is not in the still calm of life, or the repose of a pacific station, that great characters are formed . . . The habits of a vigorous mind are formed in contending with difficulties . . . Great necessities call out great virtues. When a mind is raised, and animated by scenes that engage the heart, then those qualities which would otherwise lay dormant, wake into life and form the character of the hero and the statesman.”

I learned a new word recently, “Awfulizing.” A person engaged in “Awfulizing” assumes the worst case scenario will come true in any situation. “Awfulizers,” can only see the potential hazard ahead and prepare themselves for a disaster. I think I’ve been doing a good bit of “Awfulizing” myself in recent weeks.

I have watched unfolding events in Washington with despair. Every time I’ve seen regulations cut that would protect consumers, the environment or the work place -I’ve set off on a case of “Awfulizing.” I’ve agonized over the House version of the health care bill. Each time, I have assumed the worst that can happen will happen. That was before the past weeks in Washington, where there has been a media circus revolving around connections between Russia and the Trump campaign, resignations and the timing of firings. While all of this is going on, the concerns and needs of ordinary people are put aside in the midst of the latest scandal talk.

I read an article a few weeks ago where a person likened today’s period of “Isn’t this awful” thinking to the experience of England in the Blitz. During an eight-month period, from the fall of 1940 to late spring of 1941, England was bombed almost daily. While many people in England are bemoaning *Brexit the writer pointed out, that any fallout from Brexit could not compare to what people endured as they lived through the Blitz in London. The writer then added, nor does it compare to the height of World War II when almost every family in the United States had one or more family members deployed in the war effort.

What I’ve been forgetting in all of my “Awfulizing” is that, while I don’t like much of what is happening in Washington these days, God is still God. God still works through God’s people for good. God is a God of justice. When God works in the hearts, minds and souls’ of God’s people, truth rises to the surface. There is “Awfulizing” and there is action. God always calls us to move from looking at the problems in our world to working on positive solutions. The choice is really ours. Where does God need us today? Is it “Awfulizing” or is it to start working for solutions?

*Brexit -The decision in 2016 by popular vote for the United Kingdom to leave the European Union. The decision impacts everything from trade and students attending colleges outside of the UK, to international banking.

Once, a troubled teenager tried to trick an elderly rabbi  known for his wisdom. The boy asked, “I have a bird in my hand…is it alive? Or is it dead?”  If the rabbi said “Alive,” the boy planned to crush it.   However, If the rabbi said “Dead” he would open his hand and let the […]

In A Moment, Life Changes

I titled my first sermon as a seminary student, “Transforming Moments.” The sermon was based on II Peter 1:16-18, “For we did not follow cleverly devised myths when we made known to you the power and coming of our Lord Jesus Christ, but we had been eyewitnesses of his majesty. For he received honor and […]

I was visiting in a home one day when the six-year-old granddaughter, who lived with her grandparents, arrived home from school. Her mother had died when she was only three. It was a hard time for the child. I had gotten to know the grandma and really liked her, which was why I was so […]

Michael Slaughter, of Gingsberg United Methodist Church in Ohio says that, “Too many people are bringing their understanding of the world into the gospel, instead of letting the gospel, transform their thinking.” The apostle Paul recognized that as a problem in the early church. Most of his letters address ethical issues related to living a […]

*No Boundaries to God’s Grace

There was a time in my life when I had God pretty well figured out. I knew the limits of God’s love. I was exceptionally clear on who was on the inside and who belonged on the outside. I had a clear idea of the boundaries of God’s grace. All of that crashed when life […]

Surprised by God’s Angel of Mercy

I was about as poor as I ever want to be the winter I was going through a divorce.   We had  a propane gas tank that needed to be refilled regularly.   I was at that point where I was almost eligible for the maximum amount I could get to help pay my heating costs for […]

Faith and the Legacy of Martin Luther King Jr.

The Civil Rights Movement of the 1950’s and 1960’s was a period of  great unrest.   For people in the Civil Rights movement, it was not only a challenging, but a dangerous time.  The Rev. Dr. Martin Luther King Jr.  stood strong under tremendous pressure. Steeped in the scriptures, he inspired people with words of justice […]