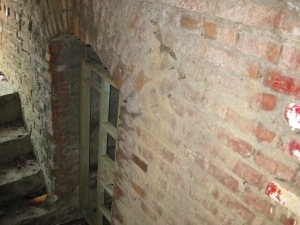 Dietrich Bonhoeffer was a theologian, pastor and author, who lived in Germany during World War II.

His book, “The Cost of Discipleship,” was foundational to my understanding of Christian life.  He wrote, “Only (the one) who believes is obedient, and only (the one)  who is obedient believes.” His life became a demonstration of that faithfulness.

From the beginning of the Nazi rise to power in Germany,  Bonhoeffer vocally resisted their inhumane policies, towards Jewish people. Later he would become part of the German resistance.  Bonhoeffer  was arrested on April 5, 1943. Eventually, he was transferred to the Flossenburg concentration camp, where he was executed two weeks before the camp was liberated.

Outwardly, he was the picture of confidence, yet inwardly he questioned himself.   While in prison, Bonhoeffer wrote this haunting poem, asking who he really was at his center.  The person other people saw, or the one he thought himself to be.

Who am I? They often tell me
I stepped from my cells confinement
Calmly, cheerfully, firmly,
Like a Squire from his country house.

Who am I? They often tell me
I used to speak to my warders
Freely and friendly and clearly,
As thought it were mine to command.

Who am I? They also tell me
I bore the days of misfortune
Equably, smilingly, proudly,
like one accustomed to win.

Am I then really that which other men tell of?
Or am I only what I myself know of myself?
Restless and longing and sick, like a bird in a cage,
Struggling for breath, as though hands were compressing my throat,
Yearning for colors, for flowers, for the voices of birds,
Thirsting for words of kindness, for neighborliness,
Tossing in expectations of great events,
Powerlessly trembling for friends at an infinite distance,
Weary and empty at praying, at thinking, at making,
Faint, and ready to say farewell to it all.

Who am I? This or the Other?
Am I one person today and tomorrow another?
Am I both at once? A hypocrite before others,
And before myself a contemptible woebegone weakling?
Or is something within me still like a beaten army
Fleeing in disorder from victory already achieved?

Who am I? They mock me, these lonely questions of mine.
Whoever I am, Thou knowest, O God, I am thine!  Deitrich Bonhoeffer

Whatever we might think of ourselves on any given day, God’s love remains constant.  We are claimed by God, as God’s children . . . Not simply on our good days, or a single moment in time.  We are claimed for eternity.

“Do not fear, for I have redeemed you;
I have called you by name, you are mine.
When you pass through the waters, I will be with you;
and through the rivers, they shall not overwhelm you. Isaiah 43:1b“

God saw everything that he had made, and indeed, it was very good. Genesis 1:31 NRSV My daughter had a college religion class, where she was to ask her parents what they believed about creation. Knowing my daughter was fully versed on what I thought, instead I spun a tale about the Garden of Eden […]

I wonder what image was in the Psalmist mind, when writing the words, “How Lovely is your dwelling place. O Lord Most High. ” Psalm 84:1 Was the psalm writer looking at a field of flowers, covering the hillside, marveling at the intricate work of art each […]

*God – Calling Us to Return Home

One of the jobs I had growing up was cleaning out the cabins on our small fishing resort. My brother and I would clear the refrigerators of miscellaneous left overs and the inevitable cups of bacon grease. We were to empty baskets, make beds, wash dishes and have the cabin ready for my mother to […]

Finding a Way Through Our Wilderness

One of my favorite passages of scripture comes from Isaiah 35 where God promises a way through the wilderness. I have certainly needed that promise in different phases of my life. Today, our world needs it  as we bump up against intractable issues from wars, internal struggles and a changing climate threatening, the earth as […]

Among the many celebrations of May is Mother’s Day. I am always conscious that for some, Mother’s Day is one of the most painful days of the year. It stands as a reminder of the loss of mother or child. For women who have yearned for children that were never born, the day symbolizes empty […]

The Lord is my shepherd; I shall not want.He maketh me to lie down in green pastures:he leadeth me beside the still waters.He restoreth my soul: he leadeth me in the paths of righteousnessfor his name’s sake. Psalm 23:1-3 KJV I’m not sure what mental block it is, but for reasons I do not understand, […]

“Meanwhile Saul, still breathing threats and murder against the disciples of the Lord, went to the high priest and asked him for letters to the synagogues at Damascus, so that if he found any who belonged to the Way, men or women, he might bring them bound to Jerusalem. Now as he was going along […]