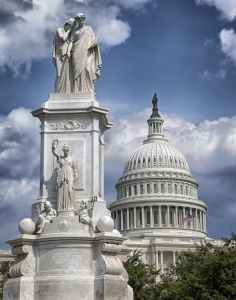 The State of the Union message was already trashed and tossed before the president spoke on Tuesday night. My frustration with Washington dysfunction grew a little more. I tell myself that somewhere are Senators and Representatives who have the interest of all of us in their hearts. I see glimmers here and there where people work across the aisle. More often, I see good efforts fail when some type of consensus has been reached, but dropped when one constituency or another doesn’t like the proposal. I wrote these words in 2015 when it was President Obama giving the State of the Union message.

Little has changed in the workings of Washington since then, except divisions have gotten worse in the past four years. A divided nation became more divided.

If I had my say in Washington’s behavior, there would be a sit down mediator dishing out orders to both get along and start taking the best ideas on both sides of the political spectrum and come up with a plan of action. There would be fewer appearances on Sunday talk shows demeaning the other party and more joint appearances with bipartisan ideas on resolving issues. There would be less name calling and more kindness. I might have everyone go over the rules set in an average kindergarten class, with heavy emphasis on treating others the way they’d like to be treated. “Always smile and be kind to others. Respect both yourself and others.”

I might give a required seminar on listening to the other, with a healthy dose of conflict resolution. I’d use a marriage counseling method of brainstorming until a common solution could be found. I would do some team building exercises that forced people from the other side to sit around a small table and talk civilly to each other. I’d have them each learn about the  other and why that person  believes as they do. I would include the current president in those lessons.

Clearly I’m not the only person who wishes that Washington would work, not just better, but actually work for the good of all people. I’d require votes on legislation passed by the House in the Senate. Likewise I’d insist that the House vote on bills passed by the Senate. I’d try to instill in Washington’s leadership, the Biblical values often spoken of, by not so often followed. I’d insist that every Senator and Representative who has Christian beside their name spend some time reading the gospels of Matthew, Mark, Luke and John and use them as a frame of reference when decisions are made on immigration policy, taxes, the safety network, and Social Security. I’d remind elected Christian leaders how Jesus said that whatever we have done or not done, for the least of God’s children, it is as if we were responding to him. I’d point out that people at our southern border are included as God’s children.

Growing up, my father was the parent  I wanted to go to town with.  He was the one most likely to give in to an appeal as we shopped.    As I got older, my father’s gift of humor delighted me. I enjoyed his love of stories and the twinkle in his eye whenever he […]

I Need a Good Shepherd

I don’t know about you, but I yearn for that which is true. I need something or someone in my life I can always trust. I need a Good Shepherd. No image of Jesus is more widely known or loved then that of Jesus as the Good Shepherd. The one who gave his life, that […]

A few weeks before my father entered a long term care facility, he had reached into his billfold and handed me two five-dollar bills. Then he said, “I wish I could do more.” I was struggling financially at the time, but was taken completely by surprise at the unexpected gesture of love and concern. My […]

“I will abolish the bow, the sword, and war from the land; and I will make you lie down in safety.” Hosea 2:18b I thought of Millie this morning as I read these words from Hosea.  Hers was the only face I recognized, one Memorial Day, as I participated in a service at Fort Ridgley.  […]

Love is the Rudder

There used to be a tradition in my denomination, to set aside one evening during our Annual Conference, to recognize pastors who were retiring. Each retiree was given an opportunity to speak.  Some would simply say, a thank you to everyone. Others would craft a story of an incident that represented their understanding of ministry. […]

Thou Knowest, O God, I Am Thine!

Dietrich Bonhoeffer was a theologian, pastor and author, who lived in Germany during World War II.    His book, “The Cost of Discipleship,” was foundational to my understanding of Christian life.  He wrote, “Only (the one) who believes is obedient, and only (the one)  who is obedient believes.” His life became a demonstration of that faithfulness. […]

“Why Art Thou Cast Down, O My Soul”

“Why art thou cast down, O my soul? Why art thou disquieted within me?” I was discouraged and upset, when these words came to me.  I don’t remember ever committing them to memory, though I must have learned the verse in some early Sunday School class. My memory is set in the old King James […]