A Devotion for the Fifth Day of Christmas on December 29
Read Matthew 2:13-23 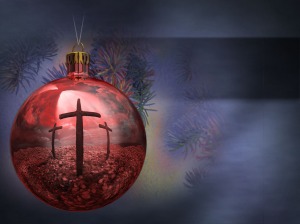 “A voice was heard in Ramah,
wailing and loud lamentation,
Rachel weeping for her children;
she refused to be consoled, because they are no more.” Matthew 2:18

Lest we had forgotten, we have been reminded of evil again and again these last weeks. Mass shootings in Las Vegas, in a church in a small town in Texas and a near miss with a school in California have all been poignant reminders that evil is among us. The promoters of evil do not take Christmas off.

In a perfect world there would be no Hitler’s, Osama Bin Laden’s. Certainly no Herods or people like Herod who think nothing of killing the innocents. There would be no children starving in Syria, or mutilated in the Sudan.  There would be no children forced to be soldiers and no deaths on the streets of our cities. But we do not live in that perfect world. We live in a world where good people get hurt and bad things happen to very good people all the time. We live in a fallen world where the forces of evil coexist with good. Daily we are given the choice to embrace the evil in us and in others, or to embrace the good. We live in a world where the forces of evil catch even the best of us. We can  reject God and in that rejection do terrible things, cruel things. We can act out of fear and follow the darkness of our diseased hearts.

Herod was such a man. He was a paradox, a man who could be generous and kind. He managed to keep peace in a place that had not known peace for long years. It was Herod who had renovated and enlarged the temple in Jerusalem. During an economic downturn he had remitted taxes and in the years of famine had his own gold plate melted down to buy food for the poor.  But as the years passed he became more and more paranoid. Terrified that he would be overthrown, he did terrible things to protect himself, evil things. He ordered the assassination of three of his sons, had his wife and her mother murdered. Augustus said of him that it was “safer to be Herold’s pig than his son.”

At the rumor a future king had been born in Bethlehem, Herod was again terrified . . .  So much that he ordered the death of every infant and toddler boy under the age of two. Joseph, warned in a dream flees to Egypt with his wife Mary and the child Jesus. Of the other children in Bethlehem we know nothing of their story. Were their children hidden and kept safe, or others spirited away? We know only of those left behind whose mother’s heart break and Rachel’s tears flow as they cry for children who are no more.

In Bethlehem, we come face to face with evil and the consequences of evil. The slaying of children, be it by Herod’s sword or a terrorist attack, leaves those who remain to pick up the pieces of life. In a perfect world there would be no need for a savior, no need for a Jesus. God’s answer to evil was to send a child born in the little village of Bethlehem, Jesus the Christ. The world will have it Herod’s, Hitler’s and Bin Laden’s. There will always be people acting out of greed and grasping for power. There will be those with misguided ambitions causing hurt and pain. Some will try to put out the light in Christ.  But the light that is Christ will not go out. No evil is so strong, nor darkness so great. There is nothing that will take the light of Christ out of our world.

Prayer: God of light and goodness, Remind us when we face evil, when we are afraid and it seems like our world is out of control . . . that you are here. You are here to walk with us as we face the evil. You are here to give us strength and courage for today and hope for tomorrow. Remind us that though we may have tribulation in this world that in Christ you have overcome the world. Amen.

My parents – never set out to build a fishing resort. My dad had been in the army for five years when WWII ended. After discharge, the family moved back to the home town, and started looking for a way to make a living.   They bought an old rickety house on the lake.   After enclosing […]

*The Tale of Two Midwives

Shiphrah and Puah are two of my favorite women in the Bible. They are courageous midwives who defy Pharaoh. Their story is recorded in the very first chapter of Exodus. Pharaoh had instructed them to kill every newborn baby boy born to Hebrew women. They not only defy him, but when asked to explain why […]

The Heavy Work of Prophesy

Jeremiah had the unenviable task of speaking truth to a people convinced of their own wisdom and invincibility. From the beginning of his prophetic ministry, he called people to repentance. Jeremiah sees visions of destruction and defeat. Attempting to turn people from the darkness of their ways, back to God, he warns of impending disaster […]

Philemon – No Longer a Slave

“For this reason, though I am bold enough in Christ to command you to do your duty, yet I would rather appeal to you on the basis of love—and I, Paul, do this as an old man, and now also as a prisoner of Christ Jesus. I am appealing to you for my child, Onesimus, […]

Grief has been too present in my extended family this past year, leaving grieving parents and grieving young adult children.   One so sudden and unexpected, the other the discouraging too fast journey of cancer.   One a small child, the other in mid life . . .  both taken too soon.   I’ve walked […]

For Thou Art With Me

“For Thou Art With Me”  Psalm 23:4b The psalmist, David, knew that God was with him. He knew it in the deepest levels of his consciousness. He felt God’s presence in the essence of his being. We have no insight into when this treasured psalm was written, yet we see how David drew upon his […]

Walking Through the Dark Valley

“Yea, though I walk through the valley of the shadow of death, I will fear no evil.” Psalm 23:4a I memorized Psalm 23 as a child in Vacation Bible School. Newer translations change the wording on the 4th verse some. But, whether translated as:  “darkest valley,” “valley as dark as death,”or “deepest darkness,” . . […]