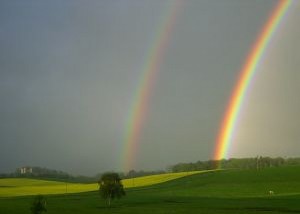 The first time I saw a double rainbow was on the day my father died. I had just picked up my  son at the University of MN.  On the way home we saw a  mammoth rainbow fill the sky.  I pulled over at a shopping center to get a safer look.   Only then did I realized there were two rainbows.

A couple of weeks later I moved to the other side of the state.  Frequently, I would drive I 90 between Rochester’s Mayo Clinic and my home along the Mississippi River in Winona MN. There was a spot  on that route where every now and then, when the light would play just right after a rain, a double rainbow would appear. Each time was a gift, bringing a sense of awe, peace and a remembrance of God’s promises, a memory of God’s nearness in a day of grief.

The rainbow is a symbol rooted in our faith tradition. Since the beginning of time, a night sky, a glorious sunset or rainbows painted in the sky have caused us to stop, reflect, and experience wonder.     The Judeo-Christian world looks to the rainbow as a symbol of Covenant and promise. When we see a rainbow we are reminded of God’s continuing faithfulness. We call to mind that God has chosen to live with us and stay beside us,  no matter how fickle our own covenant keeping might be.  God’s ongoing presence is seen in God’s care of creation.

“As long as the earth endures, seedtime and harvest, cold and heat,
summer and winter, day and night,  shall not cease.” Genesis 8:22

In  2015, on the day before  the September 11 remembrance, a double rainbow hung in the sky over the new World Trade Center, seemingly originating at the site of the trade towers. It’s symbolism brought a sense of awe to the nation. There have been other moments and other times when an Eagle soaring overhead as I returned from laying one of God’s saint’s to rest or a deer leaping  in front of a funeral procession, touched hearts with a sense  of promise in  these symbols of hope. It was as if God was of saying, “Your loved one is safe with me – trust.”

When I see a rainbow, it seems as though all the promises of God melt together, into that one deep abiding hope found in Jesus.

One thought on “Rainbows and Memories”

My home in Winona, Minnesota was a half block from the train tracks. Sandwiched between the Mississippi River to the east and bluffs to the west, made for a long and narrow small city. Trains ran frequently, but during the fall and spring they seemed to triple in number. My waterbed would shake with each […]

One of my favorite places is the Minnesota Landscape Arboretum, located in Chaska Minnesota, about a 40 minute drive from my home.   Every season is a delight.   Yesterday I was both surprised and delighted to visit when  all their lilies were blooming.                […]

Killing Fields in Our Cities

Five young children have been shot in recent weeks, leaving two dead and one grievously wounded – caught in the crossfire of gun violence. A college student lost his life, victim of a stray bullet. Last week, a coach taking his son home after a baseball game, was shot and died on the highway.  All […]

It wasn’t one of my better days. I’d taken my children to the Black Hills of South Dakota for a rare vacation.  We were plagued with one problem after another. Our exhaust system was in trouble, having just scraped the pavement, and now loosely  tied to the station wagon  frame with a wire.   I […]

A Prayer for the Nation

A Prayer for the Nation Almighty God, you rule all the peoples of the earth.Inspire the minds of all women and men to whom you have committedthe responsibility of government and leadershipin the nation of the world.Give to them the vision of truth and justice,that by their counsel all nations and peoples may work together.Give […]

Flourishing in the Courts of God

I was feeling my poverty the day a friend helped get my van started. I was in survival mode, reeling from a divorce, both emotionally and financially. Meanwhile, while he helped, I was complaining about being poor. That was when he startled me with the words, “You’re not poor. You have the Lord.” If repentance […]

Growing up, my father was the parent  I wanted to go to town with.  He was the one most likely to give in to an appeal as we shopped.    As I got older, my father’s gift of humor delighted me. I enjoyed his love of stories and the twinkle in his eye whenever he […]