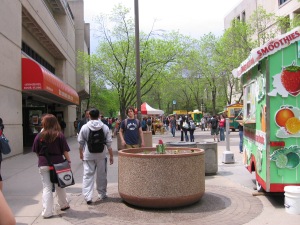 “Whether it is right in God’s sight to listen to you rather than to God, you must judge; for we cannot keep from speaking about what we have seen and heard.” Acts 4:19-20

I simply could not stop talking about it. Anyone and everyone I came in contact with, would hear a version of my youngest daughter’s very premature birth and the fact that she survived. I must have bored people to death, with all the ways, I could switch the conversation back to the miracle of her.

Peter and John had witnessed Jesus’ life, death and resurrection. Walking with Jesus had changed their perspective on life. They had absorbed his wisdom and his compassion. Disciples John and Peter had watched Jesus heal the sick and make the lame walk. They had witnessed Jesus provide and co-ordinate a spontaneous lunch for thousands of people, on more than one occasion. He had calmed stormy waters and also their stormy hearts.

After healing a man, who had a physical disability which had plagued him from birth, they were questioned by religious authorities. Soon Peter and John found themselves under arrest. Asked by what name they had managed to heal the man, Peter quickly turned the moment into an evangelism encounter. It was, he said, in the name of “Jesus Christ of Nazareth, whom you crucified, whom God raised from the dead.”Acts 4:10*

Criticizing a person who has just healed a man, in the presence of people who are celebrating that healing, is tricky business.   Not knowing what else to do under the circumstances, the authorities, told Peter and John to stop teaching and speaking about Jesus.

Asking Peter and John to refrain from saying anything about Jesus, was as hopeless as telling me, not to tell the story of my daughter’s birth. How could they possibly stop telling the story of God’s amazing love made known in Jesus? For that matter how can we?

Yet, many of us are shy Christians, reluctant to tell our stories. Uncomfortable about sharing the ways God has led us, walked with us, redirected our false starts and given us strength in difficult moments . . . Uneasy about sharing words of God’s presence and the hope we find in God’s care. What story is it that you cannot stop telling? What God story do you need to share?

*The Full story of the lame man, Peter and John is recorded  in the Biblical Book of Acts, chapters  three and four.

4 thoughts on “Telling Our Stories of God’s Love”

Who is God to You?

God said to Moses, “I am who I am.” Exodus 3:14 A few years back I started making a list  of the ways that I experience God.    It is an inadequate list, and sometimes lacking in clarity.  I’m not always certain what I  was thinking, and reflecting on as I wrote the description down. […]

I wish I could say that my seven children always got along with each other in their growing up years. But, that would not explain a set of rules I came across years after they left home, which read in part: “No tickling, poking, picking on, blowing at, pinching, biting, spitting, pulling hair or […]

One day I was running an errand when, to my surprise and delight, I saw an eagle flying low, circling overhead. It was an awesome sight to see that eagle’s spread-out wings. I would have missed it, if it hadn’t been for a couple out walking, who paused to look overhead. I stopped to see […]

Telling Our Stories of God’s Love

“Whether it is right in God’s sight to listen to you rather than to God, you must judge; for we cannot keep from speaking about what we have seen and heard.” Acts 4:19-20 I simply could not stop talking about it. Anyone and everyone I came in contact with, would hear a version of my […]

The past week the people in my community have been consumed by a combination of Derek Chauvin’s trial for the death of George Floyd, along with the death of Daunte Wright at a traffic stop, just  days ago.  People have flown in to testify at the trial. Others have come to participate at nightly protests […]

A few years ago, my family gave me a Garmin GPS for my car. I wish I could say that my GPS was without flaw. Once in Nashville TN, instead of taking me to the Botanical Garden, it took me far into the countryside miles away from my destination. I think my Garmin was downright […]

Weighing the Scales of Justice

We’ve been listening to days of  emotional testimony in the case against Derek Chauvin, the police officer charged with  George Floyd’s death.  Last week, there was excruciating detail  from Dr. Martin Tobin, a pulmonary specialist.   He took people through different videos, pointing out all the ways that George Floyd was dying and trying so hard […]